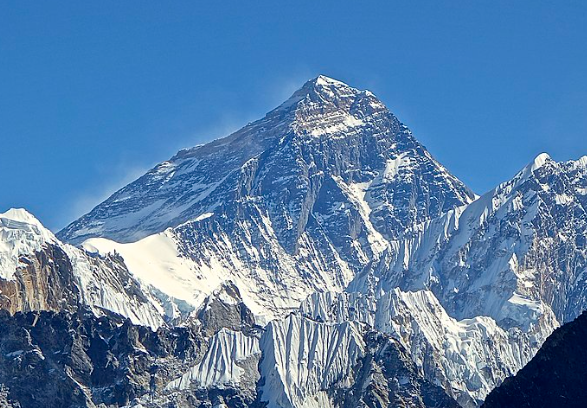 Mount Everest, or Sagarmatha in Nepali and Chomolungma in Tibetan, forms the dividing line between these two countries at the very pinnacle of the Himalayas. While the high altitude, avalanches, icefalls, and other hazards make climbing Mount Everest a dangerous proposition, its proximity to the equator (the mountain is located at about the same latitude as Tampa, Florida) makes it an attractive potential destination for adventurers.

According to Earth scientists, Everest is relatively young, at around 50-60 million years old. The highest peak on Earth was produced when the Indian and Eurasian tectonic plates collided, causing the underlying rocks to be thrust higher. Each year, that force continues to act, raising Everest’s peak by nearly a quarter of an inch.

Best Time to go to the top

May is the most popular month for mountaineers to attempt to climb Mount Everest. For a short period, often beginning around May 15th, the jet stream, a band of high-altitude winds, moves away from the mountains, resulting in milder temperatures. Plus, the monsoons are about to begin. Mountaineers typically avoid rainy seasons in the Everest region because of the slippery and dangerous characteristics the trails might take on.

Excellent weather is essential for mountaineers. According to Remsberg, climbers won’t attempt to reach the peak unless the weather is favorable. Many people have wasted weeks at base camp doing nothing but waiting, with no assurance they’ll ever make it.

How to go to the top?

There are 17 established routes to Everest, although most climbers use only two. The North Ridge is the route up Everest from Tibet, and it was here that George Mallory vanished in 1924, long before a Chinese team reached the summit in 1960. Southeast Ridge is a route selected by Tenzing Norgay and Edmund Hilary in 1953, beginning in Nepal.

Expert mountaineers agree that the two routes are equally challenging but distinct in their difficulties. While climbers on the Southeast Ridge still have to make their way quickly through the treacherous Khumbu Icefall, they also have a shorter summit day and an easier way to descend swiftly in an emergency. It is feasible to drive jeeps to base camp on the North Ridge, but climbers will need to cover several kilometers of terrain at an altitude of over 27,000 feet to reach the peak.

Estimate time to reach the top

An ascent of Everest typically takes two months.
Nearly two weeks would be spent hiking to Everest base camp, which is located at an altitude of around 17,000 feet and is staffed by staff members and Sherpa guides (5,200 meters).

The following two weeks would be spent acclimatizing to the thinner air and waiting for favorable weather conditions before they set out on the final four days of the trek, visiting further camps and ultimately reaching the summit.

Most mountaineers spend months, even years, preparing for a trip to the Himalayas. Janow claims his guides only take experienced mountaineers who have climbed at least two other noteworthy peaks.

The extreme difficulty of climbing Everest

As the highest peak in the Himalayas, climbing Mount Everest is the ultimate goal of many mountaineers who hope to end their careers with a memorable ascent that requires them to overcome the physical barriers they have created. But they should be prepared for the danger and have some background knowledge.

Before climbers even set foot in the Himalayas, they must put in a lot of time to build stamina and train to adapt to challenging circumstances like the low temperatures and low-oxygen environment at higher altitudes. Remember that surviving in the “death zone” at 8,000 feet above sea level is highly challenging. Because of oxygen deficiency, the body begins to react negatively. Climbing at high altitudes can impair a person’s judgment, cause a heart attack or stroke, or make altitude sickness extremely difficult to overcome. However, a select number of mountaineers each year attempt Mount Everest’s ascent to test their mettle.

Climbers need to adapt to the air’s reduced oxygen level before reaching the peak. You will need to make multiple journeys from Everest Base Camp to higher altitudes to accomplish this. This is why Asian Hiking, whose staff are all Sherpa guides from the tribe known to have spent their entire lives trekking practically in the Himalayas, is essential for every Mount Everest expedition.

In Japan, the highest point is Mount Fuji. Its top is nearly 2.5 miles above sea level, while its base is 78 miles in...