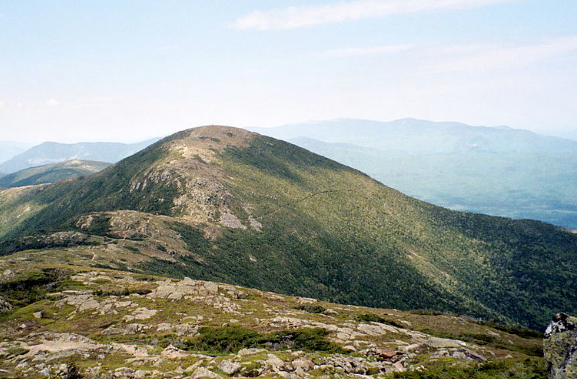 Despite its prominence between Mts. Pierce and Monroe, Mt. Eisenhower is often overshadowed by the bigger Mt. Washington. While not as tall as Mount Rainier or Mount Hood, Eisenhower is nonetheless a respectable summit at over 4,760 feet (see below). Compared to the other “listed” New Hampshire 4,000-footers, it ranks around about 11th. Because of its proximity to the Appalachian Trail, this peak draws tens of thousands of visitors each year. However, the scenery from the top of Mt. Eisenhower is the mountain’s main draw. Hiking to the top will take you above the treeline and reward you with a sweeping panorama that includes the Southern Presidentials and Mount Washington. A rewarding adventure with little exertion.

The Trails to the Top

The Southern Presidentials, of which Eisenhower is a part, is a ridge southwest of Mount Washington. The Crawford Path runs southwest to northeast along the ridge, the Edmonds Path runs west to south, and the Mt. Eisenhower Trail runs south to the Dry River Wilderness.
The Eisenhower Loop is a short (less than one mile, fewer than 400 vertical feet) detour off the official Crawford Path that leads to the actual summit.

From the Crawford Hostel, hikers can access the Crawford Path, which ascends Pierce at a leisurely pace before continuing along the ridge to Eisenhower, Franklin, Monroe, and finally, Mt. Washington’s southwest face via the Lakes of the Clouds Hut. Even though the entire Crawford Path is doable in a day, you’ll need a lot of it due to the distance (8.5 miles/13.7km one way) and the elevation gain (4750 feet). Nevertheless, the ten-mile round ride to and from Eisenhower makes for a pleasant day trip.

Beginning on Mount Clinton Road, Edmonds Path leads directly to the northern end of the Eisenhower Loop from the west. With a round-trip distance of 3.3 miles and a rise of 2750 feet, this is a doable day hike that can be extended by continuing to meander along the ridge.

From its beginning on Mt. Webster, the Appalachian Trail travels along the ridge of the Southern Presidentials to its endpoint at Mt. Pierce, where it meets up with Crawford Path. Beginning from Route 302, the Appalachian Trail travels west via the Webster Cliff Trail, crossing the summits of Mounts Webster, Jackson, and Pierce before connecting with the Crawford Path.

The Lake of the Clouds Hut is located at the junction of the Ammonoosuc Ravine Trail and the Mount Monroe Trail at the northeastern extremity of the Southern Presidential ridgeline. This approach up Mount Monroe is fully detailed on this page.

From several locations in the Dry River Wilderness, more trails lead to the crest of the Southern Presidential Mountains. Mizpah Hut, south of Mt. Pierce’s peak, is accessible through the Mt. Clinton Trail and the Dry River Cutoff, while Lake of the Clouds Hut, on the col between Mts. Monroe and Washington are reached via the Dry River Trail. You can utilize these if you want to build a big loop (and don’t mind going down and back up).

Several other trails in the region aren’t included here, and you may play around with the loop to make it a longer or overnight trek. Think about using a map like the one with the White Mountain Guide.

Mount Clinton Road, accessed through Route 302 in Carroll, New Hampshire, is where you’ll find both parking spaces for this trip.

To the parking lot located at the Crawford Connector.
From the junction of Routes 3 and 302 in Twin Mountain, New Hampshire, head east on Route 302 for eight miles. Make a left at the Mount Clinton Road exit. As you approach from the east, you’ll see Mount Clinton Road on your right. Add another 20 miles to your trip from the AMC Highland Center (or head Westward another 4.0 kilometers from the Willey House Historic Site). You will enter a parking lot by taking the first left turn on Mount Clinton Road. You’ll find the start of the Crawford Connector Trail (to the right of the toilets) at the very end of the parking lot.

To the parking lot located at Edmond’s Path.
You will find a parking area on the right side of Mount Clinton Road approximately 2.3 miles after leaving the parking lot at the Crawford Connector (see the directions above for how to get there).