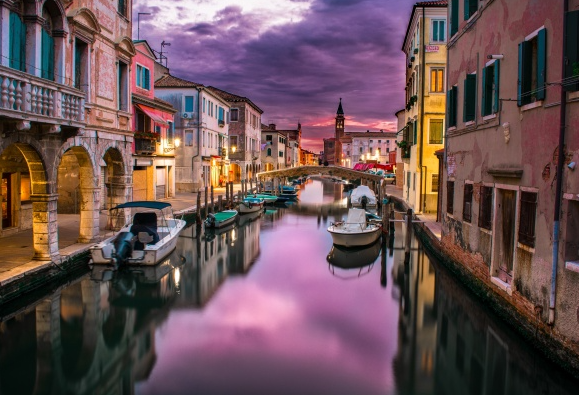 Very few towns have the same level of renown as Venice, and it’s easy to see why. Since ancient times, the allure of this well-known city has prompted passionate proclamations of anticipation, and that trend shows no sign of abating. The summer months indeed see an influx of visitors, but that doesn’t mean they all have good taste. If you’re looking for a gorgeous city on a planet full of them, look no further than Venice. Nothing else needs to be said about Venice.

St. Mark’s Basilica and the Grand Canal are just two of the many attractions that bring millions of tourists to the small group of islands that make up Venice each year, helping to keep it a vital economic centre and one of the world’s most popular tourist destinations. Let’s see some of Venice’s top attractions.

During the peak season, the water buses that cruise the Grand Canal, particularly in the early morning and late evening, can get very busy. Taking a cruise down the Grand Canal at night is a great way to avoid the crowds while enjoying the city’s stunning architecture (especially the frescoes and chandeliers).

The other option is to take a water taxi, which will allow you to avoid the crowds on the Grand Canal. You can even get champagne on board some boats. It’s more expensive than taking the bus, but a boat is an excellent option for a group that wants to take a break from walking and enjoy the sights and sounds of the water as they cruise (it is often cheaper than gondolas, too). Additionally, water taxis are more convenient while travelling through narrower, more picturesque canals. The fact that there will be no other passengers disrupting your photo ops while you cruise at a snail’s pace.

St. Mark’s Basilica is the city’s most recognizable structure, but St. Mark’s Square is the city’s most recognizable public space. This area on the Grand Canal, facing San Giorgio Maggiore Island, is one of Venice’s most significant landmarks and a must-see for any tourist. The Piazza is ideally framed by a collection of elaborate buildings connected by arcaded walkways. St. Mark’s Campanile, St. Mark’s Basilica, the Doge’s Palace, and the Torre dell’Orologio are all located on the square. This area is an excellent jumping-off point for seeing some of Venice’s most famous landmarks.

Every year, millions of people stand in line to get a glance inside San Marco, and they all have good reason to. The church of San Sebastiano houses some of the most important works by Paolo Tiepolo, a Venetian Renaissance master. Tiepolo’s ceiling paintings were restored, and the church itself has been repaired and restored over more than a decade, thanks to the efforts of Save Venice Inc., the non-profit responsible for restoring countless Venetian artworks and architecture across the city (including the brilliant marble facade of the Santa Maria dei Miracoli).

Every year in September, when the Venice Film Festival is in town, the Hotel Riviera on Lido island becomes the place to see celebrities. However, a journey to this breathtaking site shouldn’t be delayed till the beginning of autumn if possible. The hotel has an impressive literary history, with notable authors like Ernest Hemingway, Lord Byron, and Thomas Mann having stayed there (Mann was actually writing “Death in Venice” while he was there). Take a break from creating your tale by stretching out on the peaceful sands of the beach that will stay in your memory forever.

St. Mark’s Basilica, one of the ecclesiastical buildings in Northern Italy, was completed in 1092 and is widely considered the most recognized and recognizable in all of Venice. The exterior of this church is stunning, with its many statues and pieces of art, while the inside, with its domed ceiling and frescoes, is a masterpiece of Byzantine art. This basilica is one of the most well-known examples of Byzantine architecture in Italy; it can be seen in Piazza San Marco and is easily accessible from the Grand Canal.

The Ponte di Rialto is the most well-known and recognizable of all the bridges that cross the Grand Canal. This bridge connects the San Marco and San Polo neighbourhoods of Venice and serves as a vital pedestrian thoroughfare and a major tourist attraction. This apex, which was once a wooden bridge, stood for hundreds of years before finally collapsing in 1524. An elaborate stone bridge was constructed due to this tragedy and is still in use today. The vast waterway is artfully framed by the bridge’s symmetry and exquisite detailing. In addition, the bridge is lined with businesses selling anything from souvenirs to jewellery.

Although the Bridge of Sighs is relatively modest compared to other Venetian landmarks, it is nonetheless one of the city’s most visited attractions and an important historical site. The bridge connects the Prigioni Nuove to the Doge’s Palace across the Rio di Palazzo. It is said that before being hauled to their punishment in prison, criminals would look back at Venice one final time from the bridge as they were being escorted away from the Palace. It would be a shame to visit St. Mark’s Square and not catch sight of this famous bridge.

Located in the peaceful Dorsoduro neighbourhood of Venice, the Peggy Guggenheim Collection is one of the world’s best private art collections. This single-story building seems like an incomplete palace from the Grand Canal. In 1949, Guggenheim bought the unfinished building and promptly filled it with her extensive collection of 20th-century art. Her holdings included works by renowned artists such as Mondrian, Dal, Pollock, and Picasso, as well as more obscure figures from the surrealist and abstract expressionism movements.

During the middle ages, the Burano Lace School instructed merchants on how to create the elaborate materials that Leonardo da Vinci visited in 1481 to buy (he bought fabric here for the main altar of his masterpiece at the Duomo di Milano). Piazza Galuppi is home to the Venice Lace Museum, also known as the Museo del Merletto. This museum provides an in-depth look at the history of lace. Be sure to see the well-known Church of San Martino, characterized by its distinctive leaning campanile (just like the leaning tower of Pisa).

Unlike Venice’s larger, connected islands, this one is entirely independent. San Giorgio Maggiore is easily accessible by Vaporetto or private water taxis from the Venice Basin and the Grand Canal. Fantastic San Giorgio Monastery, the Church of San Giorgio Maggiore, and a vast campanile similar to the one in St. Mark’s Square can all be found on the island. Explore the little harbour and its moored boats, stop at the beautiful church and monastery and walk up the campanile for breathtaking views of Venice’s main island.