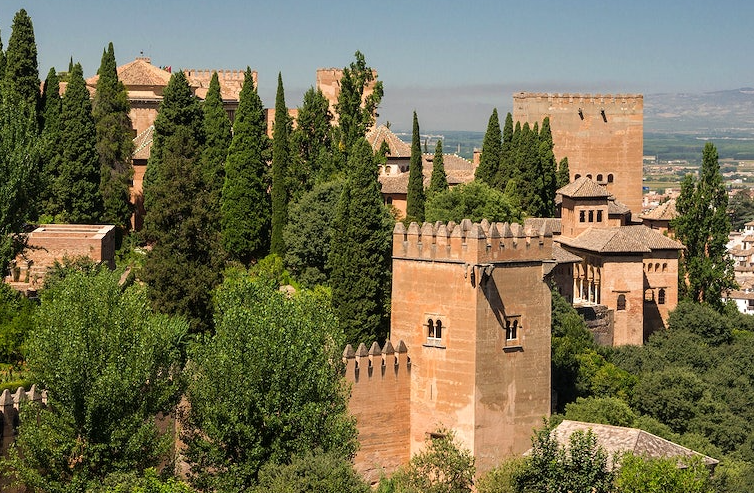 Granada, Spain, was an important city in the Moorish empire for centuries due to its picturesque setting at the base of the Sierra Nevada mountains. Everything about this city reeks of its past as the last Moorish bastion in Andalusia. This lovely city has a rich history that includes periods as a Catholic, Moorish, and even gipsy stronghold throughout several centuries.

The Alhambra is a palace, castle, summer getaway, and walled town, making it impossible to adequately describe in a few sentences. It was constructed between 1200 and 1300 during the last centuries of Muslim dominance in Andalucia for the Nasrid dynasty, who ruled the Emirate of Granada. After the “Reconquista,” Isabella I and Ferdinand II, Catholic Monarchs, made it their royal court. Book well in advance and spend an enthralling day pottering about royal chambers, serene courtyards, religious renaissance, and Moorish palaces.

Albacin, perched on a hillside opposite the Alhambra, is a charming maze of winding alleys, charming plazas, lovely courtyards, and, this being Granada, many more significant religious and historical landmarks. Souqs, or markets in the style of souks, may still be found in Albacin, making it a pleasant destination for retail therapy, gastronomic exploration, or liquid refreshment. Because of their Moorish heritage, most buildings here are still painted white, and the Arab tiles are stunning. Several magnificent churches may also be found; practically all of them were initially mosques or constructed on the foundations of mosques. Albacin’s four beautiful Puertas de las Muralles make the journey their part of the adventure (mural gates).

This majestic architecture, Spain’s second-largest cathedral, was constructed on the site of Granada’s mosque at the turn of the 16th century.
As it was built during a period of transition in style, it has gothic foundations but a renaissance exterior and interior. Diego de Siloé was tasked with bringing the two aesthetics together, and his successful efforts earned him widespread respect in his day. The best way to take in the splendour of this cathedral is to enter the great chapel and look up at the stained glass windows, sculptures, and paintings that line the walls.

The expansive Alhambra gardens are so grand that you may need an extra day to explore them all. These lush and stately gardens are fragrant in springtime and have colourful flowerbeds, neatly trimmed hedges and topiaries, geometric pools and fountains and all sorts of surprising architectural flourishes. The Generalife Palace, located atop the hill where the Emirs enjoyed incredible retreats in the summer heat, is the most striking feature. The water from the fountains drained on the patio’s stones cooled the area down.

The baths on Carrera del Darro may look ordinary from the outside, but they are pretty unusual. After the re-conquest, most bathhouses were torn down because of their shameful association with prostitution. You’ll get a rare view into a genuine hammam from the days of the Emir. They survived because they were underneath a private residence built when the city was captured. It’s remarkable how the caps on the columns that support the arches are salvaged from Roman and even Visigothic structures. Star-shaped cutouts in the ceilings of each room let in ghostly rays of light.

The tombs of two of Spain’s most revered monarchs lie adjacent to the cathedral. Located here are the tombs of Isabella I and Ferdinand II, the Catholic monarchs who, at the end of the 1400s, led the Christian re-conquest of Spain from the Moors. The Italian sculptor Domenico Fancelli created a stunning alabaster monument for them. Their successors’ (Joanna of Castile and Philip I) and grandson (Miguel da Paz, Prince of Portugal, who died as an infant) tombs can also be seen in the Royal Chapel.

When Islam was the dominant religion in this area, this was the site of Granada’s Great Bazaar, where vendors would sell their silks and spices along a network of intersected streets. A single corridor lined with souvenir stores, some of which are more interesting than others, is all that is left of the ancient building in its present form. Ceramics in the Fajalauza style, which are earthenware made in the Moorish style and hand-painted with blue or green plant themes, are an excellent gift truly emblematic of Granada and Andalusia. Also genuine is the terrace style, which features highly detailed designs carved onto inlaid furniture and other woodwork decorative pieces.

Located immediately east of Granada, this national park is home to the southernmost ski resort in Europe and the highest peak in Iberia. You can reach these breathtaking mountain vistas from Granada’s historic district in less than half an hour.
The journey is made more interesting by the gradual transition from the plain’s scrub to the juniper shrubs, wild olive trees, and oaks that characterize the higher elevations. At the resort’s periphery, boar and wild cats graze among towering Scotch pines in a forest. Due to its elevation, Sierra Nevada’s Ski Station has a good season from December through April.

When Christians retook Granada, a wide variety of people, including gipsies, artists, and refugees, settled in the area known as the Sacromonte (Sacred Mountain), hippies of the Middle Ages; these people, who were called “Romas,” lived in caverns cut into the side of a hill. Some of these caverns have been renovated into modern dwellings. In contrast, others have become venues for flamenco performances, and the Museo Cuevas del Sacromonte provides an intriguing look into the history and origins of 10 different caves. While you’re up there, stop into the Sacromonte Abbey to see some breathtaking scenery and explore its underground tombs. To get to the Sacromonte caves and abbey, you can take a taxi or bus or walk a long way upwards.

Travel to “El Bauelo” to experience the best and oldest Arab baths in Andalusia. These baths, first constructed in the eleventh century, played a significant role in Moorish religious and social life. Islam views water as a symbol of holiness, and its ritual baths serve as a location for bodily and spiritual purification. When the Christians retook Andalusia, they assumed the worst about the communal baths (Communal baths? Surely filled with perverts!) and destroyed most of them. While a house was subsequently constructed on top of El Bauelo, it was nonetheless designated a National Monument in 1918. It’s not a massive complex—just a locker room, a massage room, and a “hot room” with natural baths—but it’s fascinating. Your time investment is minimal, at most 10 to 15 minutes.