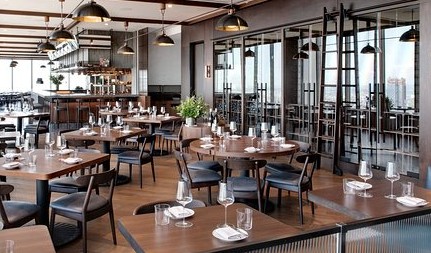 Are you interested in visiting New York’s most famous restaurants? Then you have arrived at the right destination!   New York has many excellent restaurants, and one of the most enjoyable aspects of visiting a new location is getting to try the local cuisine.

The city of New York is a beautiful location to enjoy a spectacular dining experience; in fact, this is among the best things to do in New York, particularly with a group of friends or a significant other. The following restaurants prove that delicious food served in an intimate atmosphere is the best path to a person’s affections.

Look no further than Daniel if you’re searching for a fantastic New York restaurant. In September 2021, the 3000-square-foot dining room was completed for the renovation and reimagination of restaurant Daniel, a revered New York city establishment. Here, locally sourced ingredients are used in Chef Eddy Leroux’s prix fixe and tasting menu creations.

Appointments at L’Artusi must be made in advance, but the wait is well worth it. The cozy Italian eatery may be unremarkable from the outside, but as you go inside, you’ll notice that this two-story restaurant is everything but unremarkable. The West Village hotspot is the master of dichotomy, creating an ambiance that is both vibrant and intimate while offering high-quality Italian food that is equally inventive and classic in its preparation. Not ordering a pasta dish at the restaurant is a huge mistake, such as the gnocchi with rabbit or the bavette with clams.

Bistro ACME is a new American restaurant found on Great Jones Street in the Noho area of Manhattan. Seasonal cuisine highlights a wide range of European flavors and cooking techniques, yet each dish has a distinct New York feel.

It is not the art deco furnishings of oak seats and leather couches that give the impression that you have entered a speakeasy upon entering Acme; instead, it is the mysterious atmosphere that gives this impression. Stop by for a meal or a drink of water, but stay for the atmosphere, as the food at this bistro is excellent and offers a wide variety of bistro options.

At Minetta Tavern, which is famous for its dry-aged beef and serves a beautiful burger that does not contain cheese and is topped with onions that have been caramelized, the meat is the main attraction. At this recently remodeled pub, you may take a trip back to when it was a favorite watering hole of literary greats such as Ernest Hemingway, Ezra Pound, and Eugene O’Neill. The big names at this celebrity hangout area are more A-list than ever before. Here, people-watching is almost as excellent as the signature burgers.

A large unmarked black door can be found on East 12th Street immediately below Union Square. In place of a sign, there is a bouquet of dried flowers displayed on the door. After opening the door and getting past the velvet curtain, you will find yourself in a small room filled with a rectangular sushi bar. Twenty people are seated there, and they are all prepared to spend hundreds of dollars to watch one of the most exciting restaurant games in the city. The kaiseki-only menu puts you in the hands of the chefs, who prepare incredibly craveable and delectable bites right in front of you using the best fish and seasonal ingredients. When you order from the kaiseki-only menu, you put yourself in the hands of the chefs.

Manhatta is based in and inspired by the people that flock here. It is perched sixty stories above the ground and embodies the spirit of a tried-and-true New Yorker. The poem “Mannahatta” by Walt Whitman served as the muse for creating the brand new restaurant and bar.

The Manhatta is the kind of party that, once you’ve been there once, you’ll want to keep going back to night since it has such an extensive collection of international beverages and spirits as well as a dinner menu that’s more laid back.

Aquavit is a restaurant in New York City’s Midtown located in the Park Avenue Tower at 65 East 55th Street between Park and Madison Avenues. The restaurant is known for its superb seasonal Nordic cuisine and unparalleled dining atmosphere. Aquavit takes excellent care to transform Nordic cuisine while maintaining a reverence for its traditions, a passion for attaining quality, and the willingness to experiment with new methods and components. It will be one of the most memorable experiences due to the sumptuously modern interiors and the tasting menu that features crisp and precise flavors from the Nordic region.

Midtown Manhattan, New York City, is home to the famous and prestigious French restaurant La Grenouille, which can be found at 3 East 52nd Street between Fifth Avenue and Madison Avenue. The restaurant has won multiple awards. The dining room at this family-owned French restaurant in midtown New York could not be more romantic if it tried, thanks to the deep red banquettes, the mirrored walls, and the famously lush floral arrangements. However, what keeps the dining room packed night after night is the kitchen’s commitment to traditional, tried-and-true dishes such as buttery Dover sole, silky foie gras terrine, and light-as-air soufflés.

Oceans is a seafood restaurant that draws inspiration from all over the world that Vancouver’s award-winning Toptable Group developed to produce a dining experience that is both classic and approachable. Oceans is located in the heart of Yaletown. The dishes served at Oceans use seafood obtained locally and internationally, combined with produce that is in season.

If you truly is crazy about seafood, you should go to this Union Square restaurant since oysters get all the aphrodisiac glory. The whole fish sashimi is a must-have for a date night “wow” moment, but you shouldn’t skimp on the inventive cooked options like madai snapper in Peking duck broth and the incredibly shareable mini dishes either.

Do you need to make a good impression on some guests visiting from out of town? Please bring them to The Fulton, a gigantic restaurant in Fidi designed by Jean-Georges that spans two floors and features a painting depicting a massive sea monster and an outdoor area with views of the Brooklyn Bridge. However, given that this restaurant serves some of the city’s finest seafood, you should have some octopus and diver scallops that have been grilled in addition to the burger. We think you’ll enjoy them.

New American and French cuisine are served at Per Se, chef Thomas Keller’s restaurant on the fourth story of the Time Warner Center at 10 Columbus Circle (between Eighth Avenue and Broadway) in New York City. His mastery of the kitchen and the quality of the food served there have earned Per Se three Michelin stars.

Both the veggie and chef’s tasting menus here consist of nine courses, and feature dishes like porcini mushroom potage, green bean cassoulet, and Norwich Meadows Farm squash salad. For the carnivores among you, we recommend the herb-roasted Atlantic halibut, the lamb rib-eye from Elysian Fields Farms, or the Hudson Valley duck foie gras.

The restaurant’s location near Columbus Circle also affords guests a stunning view of Central Park. Remember that reservations are required and that walk-ins are not welcome if you’d like a window seat.

If you’re looking for upscale New American with a French flair, The Modern is one of the city’s finest restaurants. It looks out into the Abby Aldrich Rockefeller Sculpture Garden and may be found in the Kenneth C. Griffin Building at the Museum of Modern Art.

The Modern serves both lunch and dinner. You can eat at the bar, dining room, or an exclusive table right in front of the kitchen while ordering from the a la carte menu. You know the food is exceptional if a restaurant has two Michelin stars and four James Beard Awards. You can tell the chef had a good time creating the menu, making this one of the top Midtown NYC restaurants to visit if you’re looking for a unique spin on a classic dish.