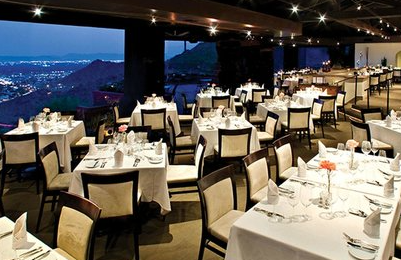 The cultural environment in Phoenix is flourishing and has become an important center for the arts. It features a variety of restaurants serving cuisines from throughout the world, such as those specializing in Japanese, Italian, Mediterranean, and Latin American meals.

One thing that all of Phoenix’s finest restaurants have in common is a dedication to using high-quality, locally sourced ingredients in remarkable ways. We’ve listed here the top 12 restaurants in Phoenix so that you can make an informed decision.

Phoenix should be top of your list when you think of the best places to go for steak in the United States. Discriminating carnivores can find excellent cuts of beef at several local eateries. The famed Durant’s in Phoenix’s midtown serves up searing steaks in old-school elegance, complete with red velvet booths. This is arguably the best restaurant in Phoenix. It is well-known for its delicious martinis, steaks, stone crab when in season, fresh fish, and sweet treats. The recipient of Gourmet Magazine’s prestigious award.

The steaks, from top sirloin and New York strip to fillet mignon and rib eye, are what you should have here. Yes, liver is also on the menu. A member of the elite Durant’s Porterhouse Club is someone who can finish a massive 48-ounce porterhouse in one sitting. Upon joining, your name will be inscribed on a brass plate and proudly displayed so that others can admire your meat-eating prowess.

There are so many aspects of Kai worth mentioning that it’s hard to know where to begin. Jack Strong, Michael O’Dowd, and Consulting Chef Janos Wilder round out the elite kitchen staff. Using resources from nearby tribe farms, they’ve created a menu of fantastic meals with a distinct Native American flavor, such grilled buffalo tenderloin with smoked corn puree, scarlet runner beans, saguaro blossom syrup, and cholla buds.

Kai’s terrace, which looks out over the Estrella Mountains, is the perfect place to eat such earthy yet ethereal fare. At the same time, sipping on a margarita made with prickly pear cactus. Kai in Arizona is the only place in the US where you may dine on exquisite dishes influenced by Native American culture.

3. Fuego at The Clarendon

You may have a bite to eat at Fuego at the Clarendon, a chic restaurant located within the Clarendon Hotel. This restaurant offers a selection of Latin meals prepared with fresh ingredients in a contemporary setting. The restaurant’s patrons have their choice from an extensive menu that features items such as pork medallions, empanadas, nachos, tostadas, pasta, burgers, soups, and salads. Its dining room features a trendy yet rustic decor with paneling built from reused wood, bright lights in the style of Morocco, and floor-to-ceiling windows that provide a stunning view of the city. In addition to its dining space inside, this restaurant also features a sizable patio where patrons may enjoy their meals in the fresh air. Every day from the late morning until late at night, Fuego at the Clarendon is open for business.

Christo’s Ristorante, which boasts a national reputation, can be found in Uptown Phoenix, not far from the city’s central business district. It received mention in the New York Times as well as in the USA Today. It is a well-known Italian restaurant that serves a range of traditional Italian cuisine, including appetizers such as fried calamari, mussels, and grilled sausage, as well as veal chops, scallops, chicken tetrazzini, and several different pasta dishes. Diners can make their meal more memorable by adding a glass of white or red wine to their meal. It has a lot of old-world charm thanks to its decor, which has wooden furniture, colorful artwork, and dividers made of glass blocks. Since its founding in 1987, this locally beloved company has been run by the family it was named after.

Kevin Binkley, a James Beard Award finalist, has opened a new restaurant in Phoenix called Binkley’s Restaurant, and it’s unlike anything you’ve ever experienced in fine dining. The restaurant, housed in the former Bink’s Midtown but occupies a gorgeous historic property in the heart of Phoenix, is known for its ever-changing multi-course tasting menu. You need at least three hours to enjoy the evening at Binkley’s, which consists of more than 20 dishes. One can begin their eating experience on the patio, proceed inside to the bar, and then end up in the warm, elegant dining room with a complete view of the open kitchen. Binkley and his team serve a contemporary, seasonal American food informed by French technique and tradition, and diners can watch them create their culinary magic while they eat. One of the best tasting menus in town can be found at Binkley’s Restaurant, where chef Kevin Binkley leaves his indelible mark on each dish.

More than sixty-five years ago, the restaurant known as “Arizona’s Original Steakhouse,” The Stockyards, opened its doors with a menu featuring just beef dishes. Even in modern times, you won’t find anything but the very best corn-fed, matured steaks and prime rib on the menu. However, hold on to your cowboy hat because the dining experience here, which is experienced in a saloon decorated in the style of the Wild West, is not for the faint of heart.

The extensive and hearty menu that pays homage to the past with “New West Cuisine” flavors includes dishes such as the signature chateaubriand for two, the 20-ounce porterhouse, and sides such as whiskey street potato mash and old-fashioned buttermilk onion rings. In that regard, you will most likely have to undo the buckle on your belt to make room for a classic dessert from the American frontier, such as the Sonoran draught root beer float with Jack Daniels or the campfire s’mores in a jar.

Ocotillo is a legitimate dining and drinking complex in the heart of Phoenix, serving various New American dishes. Big dishes of beautifully browned roasted chicken, massive falafel burgers, and even little plates of roasted cauliflower that are almost as delicious and strongly flavored as a slab of steak are all part of the “New American” fare at this restaurant. For supper, you can choose from various appetizers, such as small plates of meat and vegetables, in-house pasta, and main courses. Lunch options include large, freshly made gourmet salads, sandwiches, roasted chicken meals, spaghetti, or a selection of small plates from which you can create your meal. The restaurant also features a beer garden and chic indoor bar, along with its vast wine list and well-liked weekend brunch. The restaurant is well-designed, with possibilities for both large and small gatherings, and the food is prepared with care.

Visit Flint by Baltaire if you are craving cuisine from nations in the Middle East, such as Israel, Turkey, Greece, or Lebanon. The establishment’s specialties are wood-fired foods such as pizza, chicken, steak, and octopus. The restaurant’s offerings include smoked vegetables such as asparagus, artichokes, summer squash, and cauliflower. Travis Strickland, the chef at Flint, likes to include locally farmed fruit into his dishes whenever possible. Because of this, its menu is constantly being updated. A bar that provides full service can also be found at Flint’s. Customers who eat there will like that it has an open kitchen, a large dining room, a comfortable waiting area, and modern furnishings. Flint by Baltaire first welcomed customers in the year 2015.

The renowned pizza made by Chris Bianco brings to mind the city of Naples. Bianco’s authentic Neapolitan pizza crust is a piece of beauty thanks to an oven made of bricks baked with wood and the restaurant’s dedication to excellence. The restaurant is well-known for having been selected by reviewers in New York as a candidate for having one of the best pizzas in the country. Every one of the culinary works of art offered is prepared entirely from scratch using only the highest quality ingredients. The only disadvantage? Because the location is widely known, you could need to wait to enjoy a delicious pizza. We can only accommodate parties of six or more with a reservation. The opening of Bianco and company’s second store, which can now be found at the Town & Country Shopping Center, is some very welcome news. The pizza at Pizzeria Bianco is, in many people’s opinions, the best in the country.

Anhelo is a well-liked option for celebratory meals due to its location in the heart of downtown Phoenix. A celebration of a birthday, an anniversary, or a promotion at work would be appropriate here. Brick chicken, beef tartare, ricotta dumplings, and halibut cheeks are some inventive and upscale items that can be found on the menu at this restaurant. The refined atmosphere, which has hardwood flooring, a color palette dominated by grey, fresh flowers, and abstract art, elevates the quality of the eating experience. There is a quaint area in front of the restaurant where customers can sit outside and enjoy their meals.

At Chelsea’s Kitchen, located on 40th Street just off Camelback Road, diners may indulge in Southwestern cuisine. Comfort food in the form of seasonal soups, burgers, tacos, and prime rib cooked over an open wood fire are just some options for diners at this restaurant. Any meal is improved by adding a glass of wine, a beer, or a drink such as white sangria. This restaurant may be found inside a historic structure with an industrial ceiling, leather benches, floral draperies, concrete floors, and enormous lighting. In addition to that, there is a chic patio area for eating meals outside. Since its inception in 2005, Chelsea’s Kitchen has been run by the seasoned restaurateur Bob Lynn, the restaurant’s owner.

12. A Different Pointe of View

The unusual atmosphere of A Different Pointe of View makes it stand out as one of the most memorable places to enjoy exquisite dining in Phoenix. Incredible city and desert panoramas can be seen from this restaurant, perched on the side of a mountain in the city’s north-central region. Diners are seated cozily around floor-to-ceiling windows, allowing them to gaze at the glittering cityscape below. Thankfully, the food is just as enjoyable as the atmosphere. To begin, the risotto is top-notch in its category. A poached egg prepared from farm-fresh eggs, slices of Perigord truffles, freshly produced Hollandaise sauce, and a drizzle of watercress puree top the savory rice dish with a slightly soupy consistency. The entrees include a lemon butter-poached Maine lobster that is both flavorful and indulgent. Another dish that deserves special mention is the grilled prawns flavored with piquillo pesto. The restaurant A Different Pointe of View provides outstanding New American cuisine in a breathtaking fine dining room perched 1,800 feet above the Valley of the Sun.