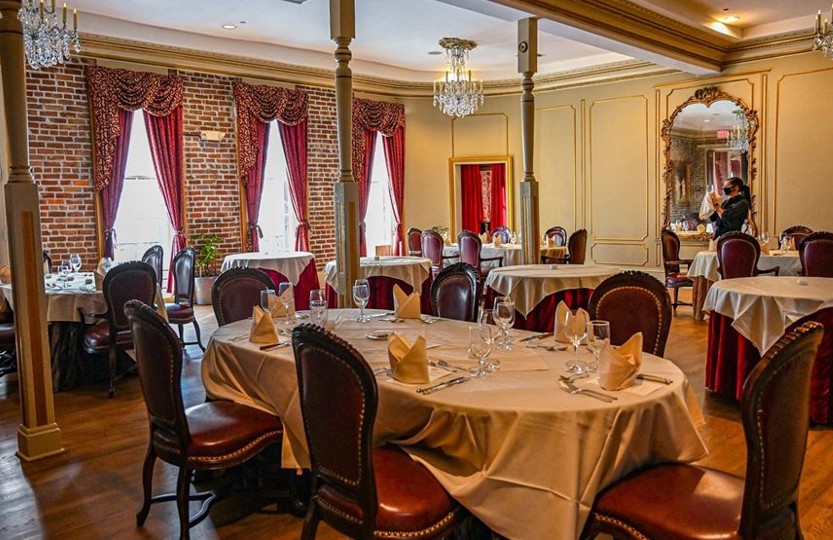 The celebration of Creole cuisine in New Orleans, the most populous city in Louisiana, is evidence of the city’s rich culinary history, which is rooted in a culture that is rich in diversity.

It’s a rare tourist who doesn’t come to New Orleans to dine at least once while there. People in this town are pretty particular about the finer aspects of a delicious meal, such as the color of the roux, the size of the Gulf shrimp used in the remoulade, or the flavorful aroma of crawfish emanating from a dish that is cooked to perfection using etouffee.

In a city where having a lousy meal is almost unheard of, everyone should prioritize eating at one of these 12 exceptional restaurants. These 12 restaurants are considered the finest examples of eating in New Orleans.

Antoine’s is the oldest restaurant in the United States that is still owned and operated by the same family since 1840. The restaurant is divided into several beautiful dining areas, each of which has a distinct style and personality. Wooden beams line the ceiling of the spacious Annex room, which also features vintage gas light fittings. In the meantime, private dining areas such as the Rex and 1840 rooms are colorfully painted and adorned with vintage images and items. On the menu of this establishment, which specializes in French-Creole cuisine, you’ll find items such as “Huitres en coquille a la Rockefeller.” This dish is comprised of baked oysters that are covered with Antoine’s original Rockefeller sauce, as well as Bisque d’ecrevisses, which is a thickened version of Louisiana Crawfish soup.

This is a delicious fusion of Cajun and Creole cuisine at its finest. The culinary talents of Frank Brigtsen, chef and owner of Brigtsen’s, are renowned across the area, and the restaurant bears his name. Chef Brigtsen spent seven years learning his craft under the guidance of chef Paul Prudhomme. He purchases many of his ingredients from local vendors and offers rotating daily specials that are almost always a sound investment. You won’t be let down by the roasted duck or the blackened tuna, but you shouldn’t skip out on the rabbit and Andouille gumbo, shrimp and grits, or pulled pork with pepper jelly sauce. A short trip on the streetcar will bring you uptown from the French Quarter to Brigtsen’s. Chef Brigtsen has won awards, including “Best Chef Southeast” from the James Beard Foundation.

Arnaud’s was started in 1918 by the French wine dealer Arnaud Cazenave in the beautiful French Quarter of New Orleans. Archie and Jane Casbarian purchased the restaurant in 1978, and they restored its stunning decor to its original glory. In addition, they brought culinary talent back to the kitchen following years of decline. The refurbished main dining room includes an Italian mosaic floor, magnificent crystal chandeliers, dark wood paneling, and beveled glass windows. The Jazz Bistro is a more flexible option, where diners may enjoy their meal while looking out into Bourbon Street. Enjoy the lovely sounds of The Gumbo Trio, which serenades diners each evening from 6.30 pm onwards. The restaurant’s famous Creole menu features dishes such as crab claws Provencal and chicken and andouille gumbo.

Tujagues, founded in 1856 by Guillaume and Marie Abadie Tujague, is the city’s second-oldest restaurant. For almost 150 years, Tujagues has satisfied the culinary needs of locals and visitors to the French Quarter. Despite years of civil strife, economic downturn, fire, and plague, it has maintained its reputation for delicious cuisine. The restaurant became well-known for its shrimp in spicy remoulade sauce and beef brisket simmered with fragrant veggies in the early years of its operation. These are both available today. The decor of the restaurant is understated and classic. The white walls, flooring, and bed linens provide a tranquil backdrop for the dark wooden furniture. In addition, around the room’s circumference, above diners’ heads, vitrines hold old bottles.

Le Chat Noir, a cabaret theatre at 715 St. Charles Ave., now features Chef Seth Temple on center stage. By early December 2021, Temple’s artistic cuisine had become the show’s closing act. Temple’s food is predominantly vegetarian and features robust flavors and locally sourced produce. Consider the work he makes with hakurei turnips. The greens and little, crisp veggies can be sautéed in a miso-based umami sauce with candied Meyerquats and fronds of bronze fennel for a dish that is both eerie and easy to make. Cooked like linguine, the turnips’ depth of clear flavor warrants a standing ovation. In the center of the roomy kitchen stands a wood-burning oven. Kevin Wardell, a sommelier who once worked in Healdsburg, California, and has since relocated to New Orleans, has put together a reasonably priced beverage selection that features the work of small, boutique producers and less familiar grape varieties. The Siesta, a drink created with tequila, a bitter aperitif, grapefruit, and lime, is one of the restaurant’s unique creations, among classics like the Sazerac and Ford’s cocktail, both of which are based on gin.

The seafood that is offered at Dickie Brennan’s Bourbon House is reliably fresh and locally sourced. If it is not the appropriate time of year for a particular fish or if it cannot be caught in the waters close by, that kind of fish will not be included on the menu. The prime oyster bar that is located within this restaurant is widely considered to be the best in all of New Orleans. Customers have the option of eating their oysters in their natural state. The Bourbon House lives up to its name by providing the most comprehensive collection of single barrel and small batch bourbons in the entire city. Among the other specialties offered are alligator boudin and shrimp barbecued in the New Orleans style.

If you were to go up to Saint-Germain in its unassuming little bungalow on St. Claude Avenue in Bywater, you might believe you were in the wrong place. There are a few popular restaurants along this short stretch of road, including Reds Chinese and Domino bar, and the Sugar Park sign on the building’s facade is a nod to the local hangout that once stood there. Drew DeLaughter and chefs Blake Aguillard and Trey Smith, whose careers include Michelin three-star restaurants like San Francisco’s Saison and Bayona, Restaurant August, and Mopho in New Orleans, had the idea to create a restaurant that would be equal parts sweet bar and small dining room.   The dining room’s prix fixe chef’s menu, which has a vegetarian option every third weekend of the month, is worth making a reservation for. Dishes like the important morel mushroom stuffed with boudin noir and the delicate scallop sashimi in grape juice are examples of how the cuisine combines global flavors, technique, and texture. Japanese kakigori shaved ice, such as the kind that can appear in a root beer float with homemade vanilla ice cream, is a standard dessert option.

The Crystal Room can be found within the Le Pavillon Hotel, which is well-known as one of the finest luxury hotels in the entire country and an architectural landmark in the neighborhood. The restaurant’s beautiful dining room has been adequately maintained, including the columns and the crystal chandeliers. Meanwhile, paintings from the era hang on the walls, and a fireplace that crackles provides ambiance and keeps guests toasty throughout the chillier months of the year. This restaurant is well-known for its innovative takes on traditional New Orleans meals and for the expert execution of recipes, such as the seafood gumbo that has won multiple awards. In addition, guests can indulge in a traditional Southern breakfast complete with biscuits and gravy or the hotel’s specialty Bananas Foster Waffle Le Pavillon.

Coquette, which first opened in 2008 and is located in a structure over 140 years old and in the Garden District, features imaginative takes on Southern food, a comprehensive variety of beverages from across the world, and New Orleans-inspired cocktails. Michael Stoltzfus, nominated for a James Beard Award for his culinary skills, views the restaurant as his first venture as an entrepreneur, as a laboratory for experimentation. He is quite successful in developing individualized tasting menus for visitors and providing an entirely new menu every day with an emphasis on regionally sourced ingredients. The restaurant Coquette excels because it honors the glorious history of New Orleans while also introducing innovative culinary techniques.

After relocating to Nola and opening Compere Lapin in the Central Business District, Nina Compton and her husband Larry Miller opened Bywater American Bistro, where she adds her generous personality and natural warmth to every plate of the innovative island that meets New Orleans and Mediterranean cuisine. This local hangout, which, like many New Orleans eateries, has changed its focus several times over the past year, has a uniquely Comptonian vibe. Upstairs, she has made a significant investment in the neighborhood of Bywater. There’s a full explanation for her devoted fan base. Crawfish pot pie, which she bakes in a cast-iron skillet until it puffs up all pretty, olive-rich antipasto salad, and semolina gnocchi all have a strong flavor presence, as do her Saint Lucian-inspired specialties like a curried rabbit with coconut rice and peas and a half jerk chicken with semolina dumplings. This restaurant is welcoming because of its superb bar menu and chic decor.

The chef’s John Folse and Rick Tramonto provide modern takes on traditional dishes from the state of Louisiana. A menu is developed that incorporates the wide variety of swamp dwellers and the global influences that have come to characterize the state’s culinary culture. The dish jokingly referred to as “A Tale of Three Fishes” incorporates components from the seafood stews of three of the seven countries responsible for settling Louisiana. This includes dishes such as the Italian cacciucco, the Spanish zarzuela, and the French bouillabaisse. The interior design of Restaurant Revolution is a seamless synthesis of edgy modern elements with classic, everlasting aesthetics. This echoes the concept of this restaurant, which wants to pay attention to tradition while continuously rethinking the possibilities of Southern cooking. This restaurant seeks to pay homage to tradition while constantly reimagining the possibilities of Southern food.

The Po’Boy sandwich and the shrimp and andouille omelet are just two examples of the New Orleans staples that can be found on the lunch menu at Muriel’s Bistro, which is located in Jackson Square. In a similar vein, some of the options for the evening meal include things like turtle soup or seafood bayoubaisse made with Gulf shrimp, fish, and Louisiana crab. Cherry hardwood floors, brick walls displaying images that are more than a century old, and vines trailing down from the ceiling combine to create a quintessentially New Orleans environment. The atmosphere here is equally as remarkable. Following their meal, visitors are welcome to relax in the Séance bar, inspired by Muriel’s past life as a legendary New Orleans bordello. It has sensual, velvety crimson furnishings and drapes.